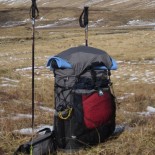 The recuperation saga continues, with good weather projected for the week ahead I was back to the Linn of Dee…yet again! I didn’t think the old body was up to carrying a weeks’ supplies (12 – 13kg) hence a simple plan of two consecutive shorter outings.

A late mornings’ start dawdling up Glen Derry in the baking heat, 23C in the carpark & I was definitely glad to have bought along the OR Helios sun hat,  with the target being Derry Cairngorm.

After refilling the water bottle at Derry Lodge it was straight up the path to Creag Bad an t-Seabhaig which provided a nice spot to take a lunch break & enjoy the view back down the glen.

The heat made the climb to the summit seem more tiring than it should be, I should have packed more than a ½ L of water, but a fine view point.

Too hot to loiter long though, I made my way north hoping to find water in one of the minor streams but they were all bone dry. I final diverted further west up the path towards Macdui & found a good source, luxury, & took another break. My original idea was to climb Beinn Mheadhoin & pitch up in the coire just north of Stob Coire Etchachan, but it was way too hot & I was feeling lazy so I ended up pitching up early by Little Loch Etchachan, at least there was a cooling breeze to keep the monsters at bay. Even with the breeze it was still 19C at 9pm when I retired to bed.

Another hot day in the offing, the big yellow ball made the tent uncomfortably hot by 6am so I was underway by around 7am. This definitely wasn’t enthusiasm just recognition that the forthcoming heat would make for an uncomfortable days’ walking……I certainly didn’t appreciate the 200m climb straight out of the starting blocks.

It turned out I wasn’t even the first person of the day on Beinn Mheadhoin’s summit though, a couple had bivied by the tors.

After a break in the shade of the tor I headed down towards Stob Coire Etchachan, descending into the grassy coire that I had intended to spend the night….the place may not have the kudos of camping on the summit has but with level, grassy pitches & a good stream it certainly has a lot going for it; at around 1000m elevation it’s also a good spot to capture any light breezes.

My descent east to the Lairig an Laoigh was pretty uncomplicated navigation, just follow the stream all the way; the only minor hazard being a rock band at c850m elevation but staying north of the stream makes them easily negotiated.

Not being in any particular hurry I took a long break by the Lairig an Laoigh, where I had a good stream on hand, before ascending Beinn a’Chaorainn. Not one of my favourite mountains but it does afford good views of Macdui & Beinn Mheadhoin.

I headed off south to cross the Moine Bhealaidh, I cut the Glas Alt Mor where I had reckon to refill the water bottle….turned out to have been a poor decision, the water tasted foul (like feted pond water), I should have carried some up in the platy from the stream in the glen. It was a hot, dry traverse of the Moine & Beinn Bhreac before descending back into Glen Derry for a large measure of H2O.

I ended up pitching up early close to the Derry Lodge foot bridge, it was the spot with the most noticeable breeze…….at least two other parties pitching up later choose pitches amongst the trees & got remorselessly chomped by the wee monsters. Even when the breeze fizzled I reckon the midge weren’t really bad, not the clouds of millions of hungry monsters that there can be, just enough to make them annoying……..the clegs (deer flies) on the other hand definitely seemed more prolific than usual & very tenacious, I hate them more that the midge.

An easy day……. after a lazy breakfast & a chat for an hour with some MBA colleagues it was a 5km sloth paced stroll back to the carpark to pick up a 3 night resupply followed by a 13km dawdle west along the LRT to Geldie Lodge.

Despite my deliberate dawdling I was pitched up by Geldie Lodge by around 4pm, I even got across the Geldie stream dry shod. A quick wash in the stream (I say wash it was the wipe down with a wet ‘J’ cloth) & laundry done (well socks washed), all that remained was to put the feet up, drink tea & say hello to the occasional Munroe baggers picking up their bikes for the return to Linn of Dee.

The day started very early, a 3am call of nature & a light frost coated the grass, no wonder I’d awoken a bit chilly; I donned the fleece & snuggled back under the quilt until 7am. I was strolling off on the good stalkers path west by 8am with the pack feeling a little heavy having taken on board a 2L platy of water expecting the hills’ streams to be very dry

The easy going ended after around 3km with a climb up the hillside through the heather to gain a deer trail, some 100m higher, running around the west side of Scarsoch Beag. The trail soon joined the stream course coming down from An Sgarsoch, which I fully expected to be dry, somewhat frustratingly it wasn’t, but better safe than sorry. The summit was gained after another hour, it was feeling very hot already.

The 300m descent west to the bealach wasn’t as soggy as usual & any wet spots were easily avoided, even the peat hags at the low point were very dry, only a single narrow rivulet of gloop remained.

What comes down inevitably has to go back up, the heat made for a very slow 300m climb to the summit of Carn an Fhidhleir

Time for another long break enjoying the view & greeting the days’ batch of early start Munroe tickers ascending from the north……. seemed like all were complaining about the heat, a couple enquired about water on the route & were happy to hear that the stream flowing down An Sgarsoch’s north slope was flowing well.

I took a slow stroll west over the rolling ground the c5km to Beinn Bhreac, probably one of the most remote spots in Scotland…. definitely a long way from any civilization.

I sat back propped against the summit cairn to ease the building tension in the abs, enjoying the vista & quiet when I was startled by a voice from behind me! My new companion was equally surprised to bump into someone in this remote spot having himself made the long approach, ~20km (using a bike) from Calvine via Glen Bruar.

After my companion departed, I continued to muse over the plan for the rest of the day & the next. I originally thought to pitch up around the head waters of the Tarf, then continue my journey over Beinn Dearg & Carn a’Chlamain but talk of thunder storms in the offing were a bit of concern, as did the building stiffness in the abs & chest muscles. The decision was made…..camp somewhere along the Tarf Water, as planned, & take an easier route back to the Linn of Dee.

In the upper reaches of the Tarf the river snakes back & forth making following the green trail a pain but with the low water levels it was easy to straight line & just splodge across the stream multiple times.

Not far downstream I found a nice bivouac spot, it was still early but after c20km & 1000m ascent I’d had enough.

Another chilly night, the light frost left the fly dripping inside & out, but nothing a quick wipe down didn’t cure & I was underway around 8:30am. A little further down stream I took off over the little bump of Tom Liath for nothing more than seeing what Loch Mhairc was looking like……very low.

The 9km down to the Tarf Hotel (Feith Uaine Bothy) seemed to go on forever & was being made quite uncomfortable by seemingly being incessantly attacked by clegs.

I took the opportunity for an early lunch break in the shade before recrossing the river & setting off following the Tarf downstream again. Shortly after passing the ruin at Ruigh Caochan nan Loagh, key to finding the ensuing stalkers path, I caught up with another backpacker I’d briefly encountered at the Tarf Hotel. I warned him that despite me having traversed this path on many occasion we were almost certain to ‘lose’ the path…….& we did, some 1km short of the Tilt amongst the plethora of deer trails. No real issue though & we were soon down at Bedford Bridge.

I parted company with my temporary companion a few kms north, on the watershed, as he was to head east to Carn Bhac in the morning. I just plodded onward under an increasingly gloomy sky & a gusty wind. I managed to cross the Bynack/ Geldie fords dry shod & noted vehicles at the Red House just upstream; it turned out to be fellow MBA colleagues undertaking some works. Having completed over 25km the abs were now starting to stiffen up so I decided that the 8km walk back to the car could wait until the morning & pitched up alongside the river.

A cloudy sky & overnight rain meant a warmer night than that I had recently experienced but provided a wet fly to pack away, despite this it was a 9:00am start down the road.

Despite the overcast sky & forecasted threat of thunder storms there seemed to be lots of folks on bikes heading for Geldie Lodge & the hills beyond, lots of tourist types rambling around the Linn of Dee bridge, ‘wild campers’ abounded in the woods close to the road……. another occasion when it took the old brain a while to register that it was now the weekend! The carpark was full to the brim & Marr Lodge had opened up the overflow parking a little way up the road…….. I was glad to be fortunate enough to enjoy mid-week outings!

This entry was posted on July 5, 2021 by Paul Atkinson in Trip Reports and tagged 2021, backpacking, Cairngorms.

experiencing the outdoors wherever we are

Wandering in the Cairngorms and other lesser ranges, by Neil Reid

Hillwalking and Backpacking Trips in the Scottish Highlands